It's been forever since I posted here... mainly because I forgot the password and was too lazy or anxious to pursue it...  I guess all things Google are connected now, so there is that.  Let's see if this works and btw, if you are an old bloggy world friend, HELLOOOOO!
Posted by Petit fleur at 9:23 AM 3 comments:

These fabulous people are raising money on FB to complete their movie about life in Pie Town, or more specifically, the Pie Lady.  So if you want to give to something sweet, here's your chance.

If you click on the photo below it will take you to the Pie Lady website and this video has some really fun music in it.  I could not get it to post like the above one though.  It is well worth the click, it's so dang light, fun and yummy!

Just a few days left to raise funds for the film "Pie Lady of Pie Town" - every little bit helps. Please pass this on to anyone you think could help as well; link takes you to the "sizzle reel" as well as to the donation site. We are $2280 short of the goal and post production costs are rising. Thanks to all of you who have contributed. Peace through pie!

How one woman in a remote western town spreads peace through pie, one slice at a time.
Posted by Petit fleur at 1:30 PM 1 comment:

Oh Florida, I did miss you.  We just got back from a whirlwind trip to see family in Orlando and S FL. It was so great to be back there.  I even missed the humidity!  It just feels like home to me.

I was seeing and enjoying my family in a whole new light as well.  It was a great homecoming.  Harley got to meet his far away family as a "real person" as one cousin put it who met him as a baby.  He will remember those characters now by God!  My aunt Phyllis scared the life out of him with her loud laughter, but he hugged her anyway.  (So cute)  She laughs when she is over come with emotion or showing her approval.   Actually, sometimes she just laughs because she likes to.  She's funny that way!

I also got to visit my most FAVORITE store on the planet, Publix.  Well, it is my favorite grocery store. Harley got his free cookie and all was right with the world.  When we landed in LA I over heard several of the passengers talking about Publix and White Castle burgers.  Things that they missed about living in LA.  I almost piped up, but I was too exhausted.  I just smiled and enjoyed listening to them and feeling a silent kinship.

This is sort of the Ventura Pirate version of the Watermelon festival of Monticello...  I have an old post about that melon fest, and Ms Moon probably has several, but I am too lazy to create links. 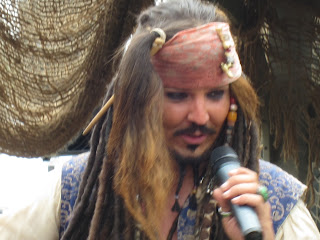 They call it Pirates Day at the Ventura Harbor!  Our boy Harley, along with the rest of the town, was bopping about the place saying things like "Shiver me timbers!"  "AAaaarrrrr!" and "Matey!"  Of course I was saying things like "scurvy creatures" and "fine wenches!"  The boy entered a costume contest hosted by none other than Captain Jack Sparrow look alike.  Pictured here...  (Not too bad, eh?  Each kid got a tiny card board treasure chest filled with little goodies including one free ride on the carousel.

The day was foggy, but a nice temperature, as always.  We got an iced coffee and proceeded on to the treasure hunt.  Yes, a treasure hunt!  How fun is this?  The next few photos are clues and other piratey sights we encountered on our journey to the treasure. 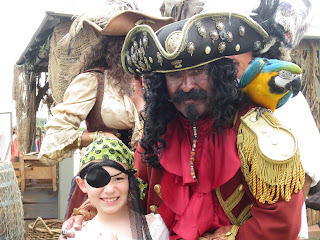 Harley with Captain Morgan and Stella the Parrot, who starred in Pirates of the Caribbean!
(For reals!) 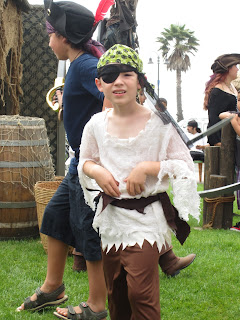 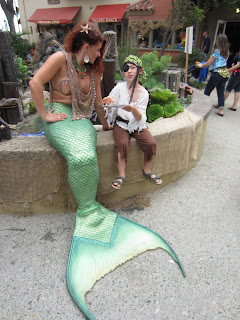 Harley flirting with a mermaid.  She really had shells on her boobies.  She was awesome! 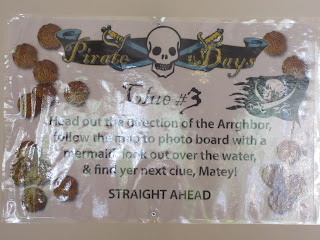 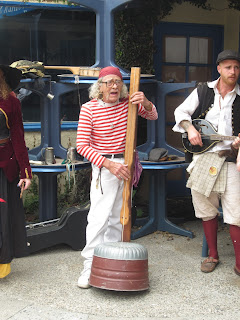 Some scurvy musicians playing a drinking song!  I sang and danced along.
The old guy playing the trashcan base was the best.

There is a video of Harley going down the big slide.  I cannot seem to get Blogger to load it, but as he is sliding down this very steep slide he's shouting "SHIVER ME TIIIIIMMMMBERRRRS!" It was very funny.  We thought he should get a bonus slide for that one!

Then of course he rode the carousel and we sort of had to let him have cotton candy, which by the way tastes like coconut oil these days.  ick! 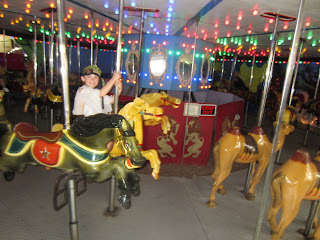 I'm always just a little late to the party. But I get there eventually.

The following are quotes  by Terence McKenna, someone I've just discovered.  If I ever met him, I probably would have followed him to the ends of the earth!  Enjoy... or not...?!

“We have to create culture, don’t watch TV, don’t read magazines, don’t even listen to NPR. Create your own roadshow. The nexus of space and time where you are now is the most immediate sector of your universe, and if you’re worrying about Michael Jackson or Bill Clinton or somebody else, then you are disempowered, you’re giving it all away to icons, icons which are maintained by an electronic media so that you want to dress like X or have lips like Y. This is shit-brained, this kind of thinking. That is all cultural diversion, and what is real is you and your friends and your associations, your highs, your orgasms, your hopes, your plans, your fears. And we are told ‘no’, we’re unimportant, we’re peripheral. ‘Get a degree, get a job, get a this, get a that.’ And then you’re a player, you don’t want to even play in that game. You want to reclaim your mind and get it out of the hands of the cultural engineers who want to turn you into a half-baked moron consuming all this trash that’s being manufactured out of the bones of a dying world.”

“If the words ‘life, liberty, and the pursuit of happiness’ don’t include the right to experiment with your own consciousness, then the Declaration of Independence isn’t worth the hemp it was written on.”


“Chaos is what we’ve lost touch with. This is why it is given a bad name. It is feared by the dominant archetype of our world, which is Ego, which clenches because its existance is defined in terms of control.”

“Ego is a structure that is erected by a neurotic individual who is a member of a neurotic culture against the facts of the matter. And culture, which we put on like an overcoat, is the collectivized consensus about what sort of neurotic behaviors are acceptable.”

“Nature loves courage. You make the commitment and nature will respond to that commitment by removing impossible obstacles. Dream the impossible dream and the world will not grind you under, it will lift you up. This is the trick. This is what all these teachers and philosophers who really counted, who really touched the alchemical gold, this is what they understood. This is the shamanic dance in the waterfall. This is how magic is done. By hurling yourself into the abyss and discovering its a feather bed.”
“Half the time you think your thinking you’re actually listening.”
“Psychedelics are illegal not because a loving government is concerned that you may jump out of a third story window. Psychedelics are illegal because they dissolve opinion structures and culturally laid down models of behaviour and information processing. They open you up to the possibility that everything you know is wrong.”

“Nothing lasts but nothing is lost.”

“Matter is not lacking in magic, matter is magic.”

“People are so alienated from their own soul that when they meet their soul they think it comes from another star system.”

“Nature is not our enemy, to be raped and conquered. Nature is ourselves, to be cherished and explored.”

"We can begin the restructuring of thought by declaring legitimate what we have denied for so long. Lets us declare Nature to be legitimate. The notion of illegal plants is obnoxious and ridiculous in the first place.”

I got this from Seth's Blog

I just really like this guy for the most part and I like how he says what he says...  If you want to check him out he's at Seth Godin
That's all I got for now.  Enjoy!

Reality is not a show

The media-pundit-advertiser industrial cycle has discovered that turning life into a sporting event (with winners and losers, villians and heroes and most of all, black and white issues) is profitable.
By turning our life into a game and our issues into drama, the punditocracy and the media-industrial complex profits. And the rest of us lose.
Politics get this treatment, but so do natural disasters, poverty and even technology.
How long does it take after an event occurs before the spinning starts? And because we've seen the spinning acted out on such a large scale, we begin to do it ourselves. We create office drama that replaces the real-life nuance of difficult decisions, and we seek out wins in our personal life when life is always about compromise.
This is dehumanizing, because it turns pathos into ratings and makes just about everyone into 'the other', not someone deserving more than clicks, linkbait and trolling.
It's so easy to boil whatever happened down to a finite number of characters, to engage in online debates with people we'll never meet and to gamify just about everything.
I'm not sure there's any number of Facebook likes that can replace a hug.
Posted by Petit fleur at 9:49 AM 7 comments:

This is what I got to look at today for approximately on hour and 45 minutes. 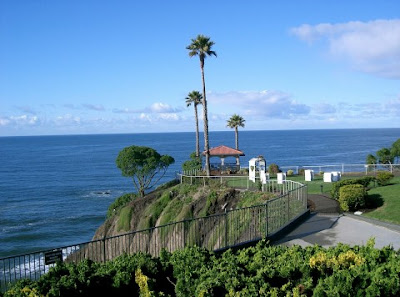 The feel of the cool breeze and warm sun....It sort of takes my breath away. 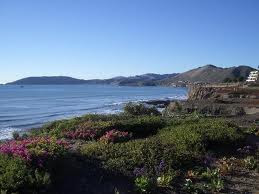 Today I was driving to see a doctor in Pismo Beach.  And for the first time since we moved here I felt at ease.  I'm not sure of the reason.  It may have been the incredible view almost the entire way of the Pacific Ocean, or maybe it was the music or the fact that I did NOT listen to NPR talk station at all.  Maybe it was the sunshine or the Louise Hay Youtubes I watched yesterday?  Who knows, but it was glorious.  I was actually kinda sorta giddy in a way that I have not been in a looooOOoong time.  It was soooo good!

The really odd thing is it was almost a two hour drive, and I do not really like driving much.  Also, I got a line on a job prospect, which sounds perfect for me.  It is working with developmentally disabled adults helping them to live more independently.  The pay is well, let's say I have not earned this little since before college, however, it is meaningful work, and I'm looking forward to incorporating my coaching into the mix and hopefully carve a better niche for myself and perhaps more pay!  I have a strong feeling that it will certainly lead someplace cool, and in the meantime, I get to help a rather disenfranchised population... this brings a sort of peace to my heart.  So that's what I'm hanging my hat on.

Things are finally starting to look up a bit and I'm doing my best to bask in that and let in more.  Hope all is going well in your worlds too.